Why commemorate Napoléon? Many people’s knowledge of him appears confined to his military campaigns. Asked about his historical significance, they might say his defeat at the battle of Waterloo in 1815 ended a period of dictatorship. Yet, this superficial understanding obscures or ignores Napoléon’s achievements and changes that have shaped modern Europe.

At the time of the French revolution in 1789, Europe, Britain included, was a group of monarchies with privileged aristocracies in each; ending the aristocracy in France threatened all the powers surrounding France. The revolution put forward the (then outrageous) idea of Liberté, égalité, fraternité for all. But France itself became disillusioned after ‘the terror’ and there was a real risk that the new rights of citizens and equality before the law might be undone. It was to save the revolution in France and restore order that a corporal from Corsica, a soldier without noble birth (and so without the privileges common to aristocrats across Europe) rose through strategic genius to become Emperor of France.

The monarchies around France – George III in Britain, the Romanovs, the Habsburgs and others – were in various alliances determined to resist what the French revolution represented, the over-turning of a European-wide order, and many of the battles fought by Napoléon were at root defensive. The various alliances against him were funded by Britain, at one point donating as much as 14% of tax receipts to allies willing to attack France.

Eventually they succeeded. However Napoléon had refashioned France in a durable way. The Napoleonic Code, i.e. the codification of law, establishing equality before the law and securing the right to private property, the rights of citizens, administrative reforms that paved the way for French becoming a national language, the founding of the Lycées and the Grandes Ecoles, the Baccalauréat, the Légion d’Honneur, the Agrégation, the Arc de Triomphe, the Colonne Vendôme, the Banque de France, the Conseil d’Etat, and much more, all continued and shape France to this day.

Many events are organised in France this year to commemorate the first Emperor of the French, who died aged 51 on the other side of the world, on the island of St Helena, on 5th May 1821. In case you can attend, here is a list of the organisations and the events they are putting together to commemorate the bicentenary of Napoléon’s death:

- Our currently registered students can borrow from our Médiathèque books and magazines about Emperor Napoléon.
- Our advanced students will discuss with their tutors aspects of the Emperor’s legacy.
- Our affiliated French Circles will mark the event with talks about the Emperor, his family, and modern times.

Below, an extract of an interview with Prof. Andrew Roberts, renowned British historian and author of a riveting biography of Napoléon:

“If you were to explain the significance of Napoleon Bonaparte (1769–1821) to someone who knew nothing about him, what would you say?

I’d set aside his military achievements—conquering half of Europe in the 16 years of his rule between 1799 and 1815—as all of those had completely disappeared by the time of the Congress of Vienna in 1815. Instead, I’d concentrate on those aspects of his rule that can still be seen in France and in much of Western Europe today.

I argue that although he didn’t have much to do with the French Revolution itself, as he was too young, he nonetheless kept the best bits of the Revolution—equality before the law, religious tolerance, meritocracy—for France and the countries that France conquered. The Code Napoleon was still in effect in the Rhineland until 1900, for example, and it underlines modern European legal systems to this day.

He got rid of the worst bits, like the mass guillotining, the Reign of Terror, the various mad ideas they had like the ten-day week, abolishing Christianity, and so on. He was the person who brought France into the 19th century with huge reforms of administration and finance. He was a moderniser.

[…] The Code Napoléon was not good for women, but then they were hardly over-endowed with rights before the Revolution. He went on to abolish slavery, of course, not once but twice. He did reinstitute it in 1802, but abolished it again in 1815. So, he had an in-out/in-out policy with slavery.”

On Wednesday 5th May 2021, President Macron delivered a speech at the Institut de France (set up by Napoléon to promote science and the arts) before going to lay a wreath at Napoléon’s tomb in the crypt of the Invalides.

Below, the conclusion addressed to the high school pupils in attendance: 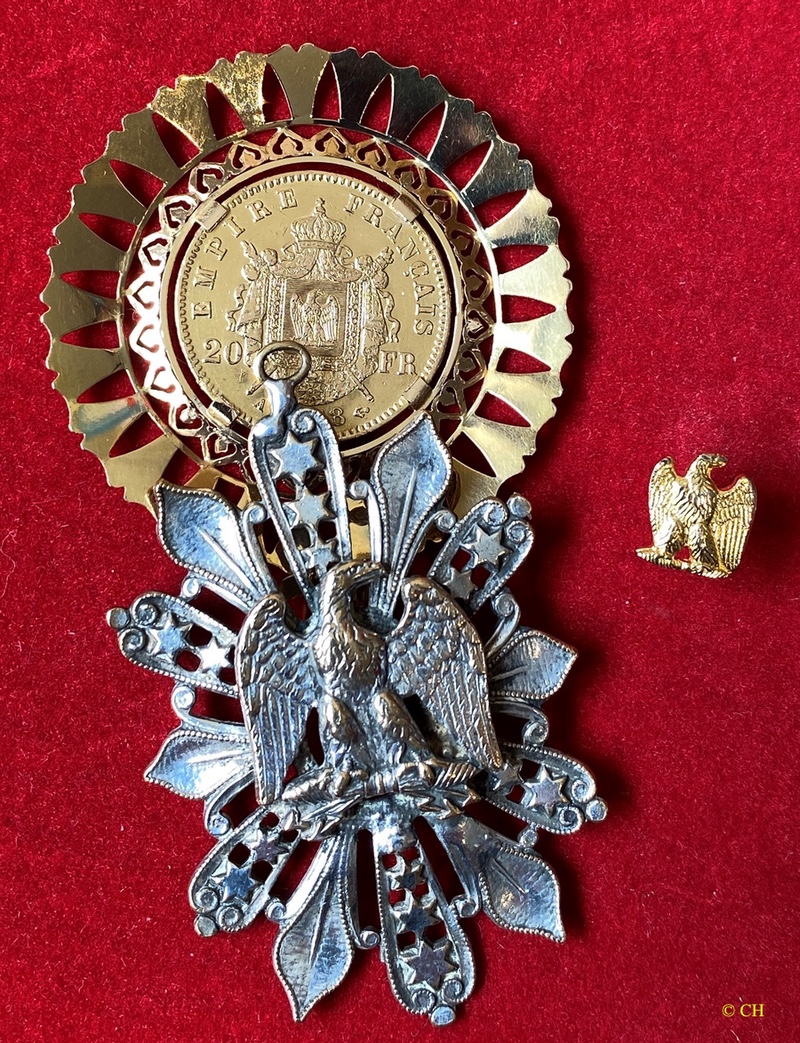 Two national heroes embodied the greatness of France and shaped its destiny: Napoléon and de Gaulle. They are regularly named as the most important historical figures for the French. Their legacy, notably administrative and legal for one and political for the other, is for everyone to see all across France today.

As for Britain’s national hero, Winston Churchill, he was a life-long admirer of Napoléon, writing that “his grandeur defied misfortune and rises superior even to time.” A bust of the Emperor was on his desk. Churchill, like Napoleon, believed in the ability of men to shape their own destiny, and consequently in the power of great men to achieve great things. Describing Napoléon as “the greatest man of action born in Europe since Julius Caesar”, Churchill wrote:

“The impetus of the French Revolution had been spread by the genius of Napoleon to the far quarters of Europe. Ideals of liberty and nationalism, born in Paris, had been imparted to all the European peoples. In the nineteenth century ahead they were to clash resoundingly with the ordered world for which the Congress of Vienna had striven. If France was defeated and her Emperor fallen, the principles which had inspired her lived on. They were to play a notable part in changing the shape of government in every European country, Britain not excepted.” 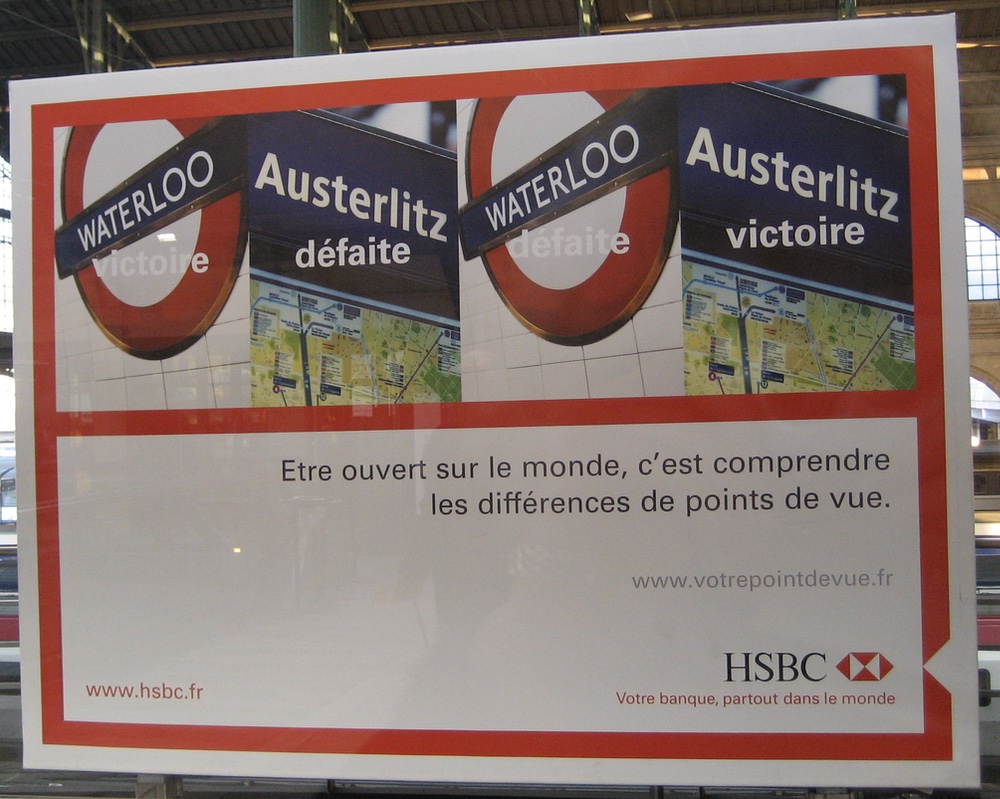 Napoléon’s achievements will always be viewed differently from either side of the Channel (Churchill and Andrew Roberts notwithstanding!) but we can amicably discuss them from different points of view. The Alliance Française de Londres and its affiliated French Circles hope to provide this friendly forum. All the while bearing in mind, as Napoléon himself wrote, « Il faut se reporter à l’esprit du temps», or, using historian Thierry Lentz’s advice, without a “grille de lecture anachronique”.

The picture above was snapped at St Pancras, not Waterloo station.