1908: The Franco-British Exhibition & the Alliance Française in London

“May the Franco-British Exhibition encourage rivalry and stimulate interchange of ideas, strengthen the brotherhood of nations, and in so doing help on the work of civilisation, and promote peace and prosperity throughout the world.”
(from a speech by the Prince of Wales – the future King George V- on opening the Exhibition on 14th May 1908.)

The Franco-British Exhibition of Science, Arts and Industry was held in London between May and October 1908 at the initiative of the Chambers of Commerce, both the London one and the French one in London, to reinforce the "Entente Cordiale" which had been signed by Britain and France in 1904. The project was underpinned by Imre Kiralfy’s project of a permanent exhibition site in London. The French Ambassador, Paul Cambon (signatory of the Entente Cordiale and founder member of the Alliance Française in Paris) relayed the idea to the French government which agreed to get involved and finance part of the project.

At the same time the idea of a channel tunnel was mooted. Ambassador Cambon liked the idea : "I regard a future Tunnel as one more bond between our two countries, as an instrument of reciprocal penetration which wil help us to know each other better.[...] I have always considered a good understanding between France and England as one of the essential factors of European peace and of general progress." (speech at the dinner of the FCCL on 6th May 1905). The Franco-British Exhibition appeared in 1908. A tunnel took a while longer to organise.

Initially the idea was to affirm the Entente Cordiale from an economic point of view. It was felt strongly at the time that international commerce promoted international peace. This was borne out by the French section of the Exhibition being placed under the patronage of the Ministry of Commerce. French authorities were a little hesitant to measure up against the might of the then British Empire, but as Cambon put it to reassure them: “c’est un concours entre deux nations qui n’ont pas les mêmes produits … pour s’offrir les moyens de se compléter.“ He was helped in his endeavour by Jean Perrier, the first ever commercial attaché from France. Even though Perrier was very traditional in his outlook (so as not to hurt the British hosts), - to France rural and luxury products, to Britain consumer goods, - it is undeniable that the FBE contributed to creating a commercial dynamic between the two countries. After the FBE had closed, and over another commercial issue, Cambon affirmed, still working hard for an entente commerciale: “Les Anglais sont des gens pratiques. Il ne faut pas oublier qu’aucune entente politique ne survivrait à une rupture commerciale.”

It was the first international exhibition co-organised and sponsored by two countries and was a celebration of British and French industry, business, culture, and empire. The bi-national character of the enterprise was a novelty and intended to “promote the entente cordiale between France and Britain. […] That adroit and charming phrase, the general adoption of which among us is a delicate compliment to the French language, suggesting more than it expresses. It stands for mutual appreciation and good-will, for common aims and interests; it covers sentiment, understanding and material relations; and in all these senses it has been conspicuously promoted by the exhibition.”

About the man behind White City

Imre Kiralfy, a famous exhibition organiser in his time and “permanent counsellor of the British government for foreign shows”, also member of the London Chamber of Commerce, was a key figure in the craze for public exhibitions in the early 20th century. As Commissioner-General for the Franco-British Exhibition, he developed the exhibition grounds on farmland on 140 acres at Shepherd’s Bush where he built the Great White City and Stadium. The stadium was a last-minute addition when London took over hosting the 1908 Olympics.

The White City was named for the white plaster finish of its building exteriors in “wedding-cake style” but despite the overall whiteness of the fair, the two organising countries of the first exhibition held there, that of 1908, had different architectural styles. There were some 120 exhibition buildings and 20 pavilions, most designed in an Oriental style, with domes and arabesque arches. They were linked by a network of roads, bridges, and waterways, and centred around an artificial lake. The halls included French and British Palaces of Industry, a French Artisan’s Palace, the prominently-placed Palace of Women’s Work (celebrating famous figures from Elizabeth I to Florence Nightingale), a Fine Art Palace (with paintings by Hogarth, Gainsborough, Corot, Courbet…), huge Machinery Halls etc. In the Garden of Progress, the Pavilion of the City of Paris was said to give one “the reposeful pleasure always attending the contemplation of a pure work of art.” A number of model villages were reconstructed to celebrate imperial achievements, such as Ballymaclinton, a “genuine” Irish village, and a French Senegalese village, with live attractions! There were also cafés, restaurants and funfair rides. 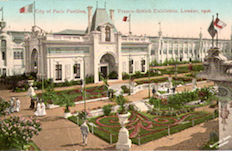 A postcard of White City 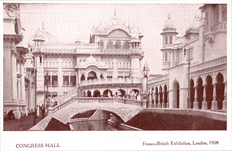 The hall where the Alliance held its first event

Two stations of the Underground were built to serve the exhibition and the games and survived long after (the old Wood Lane and Shepherd’s Bush stations). Numerous special trains were organised from all over the country and also to ferry visitors from France.

Meant initially as a trade fair, it was also undeniably a fun fair, with a lot of music all around and several exciting attractions, notably the famous flip flap. The exhibition, the largest of its kind in Britain, attracted some 8.5 million visitors from all over Britain and France, with a wide social mix. It was even a financial success with receipts of over 420,000 pounds!

King Edward VII and the French Président, Armand Fallières, visited the Exhibition en grande pompe at the end of May. An article in The Times summed up the fervour thus:

“The spirit animating the thousands of British citizens who delighted to honour our distinguished guest [President Fallières] was happily epitomized in the remark of a simple sightseer to a friend as they stood for the procession to pass. “What does ‘RF’ mean?” asked the friend, pointing to the monogram of the French Republic, displayed on a Venetian mast at the side of the road. “Why, ‘Real Friends’ of course” was the unhesitating and entirely satisfying reply.”

The Franco and the Alliance

On Saturday 18th October 1908, the first official event of the Alliance Française in the UK (whose London group had started meeting in 1884) took place at White City, in the Congress Hall: it was a lecture “with lantern slides” given by a Dr H. Lorin, Professor of Colonial Geography at Bordeaux University, on the theme of “La France et la Civilisation Française en Algérie”. The Alliance française also held a banquet for its members that same evening in the Garden Club, followed by French recitations and songs. It is there that it formalised its workings and elected its Chairman. 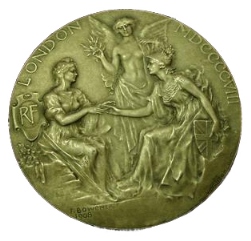 To mark the centenary of the Franco, as it was affectionately called, and the fact that it played such a part in the development of the Alliance Française in the UK, we have put on display some commemorative artefacts and postcards for the benefit of our students in our language centre at 1 Dorset Square, NW1. And the Illustrated Review of the Exhibition is available for their consultation. 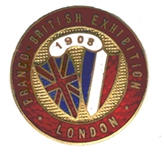 Replica of a commemorative lapel badge of the Franco-British Exhibition on sale at the Alliance.

"White City" later hosted other exhibitions and poignantly was used during WWI as a drilling ground for army recruits. After all the fun of the fair troops left from there on their way to battle … During WWII the exhibition halls were converted to parachute manufacture. After the war it became the site of the administrative buildings of the BBC. As for the stadium it became a site for greyhound racing but was demolished in 1985. The whole site was left derelict for years, the buildings sadly never built to last, until it was redeveloped. But it has never seen the same glory again! The only thing that remain are street names: Canada Way, Australia Road, Commonwealth Avenue…

The impact of the Exhibition was soon drowned in the chaos of WWI but the success of the 1908 Olympic Games contributed to the Olympic movement becoming a worldwide spectacle with international cooperation, quite a timely reminder when London prepares to welcome once more the Olympic Games in 2012. Pour la petite histoire, it was in London in 1908 that Pierre de Coubertin famously said that “L'important n'est pas de gagner, mais de participer.” Also, Arthur Conan-Doyle was reporting these Olympics for the Daily Mail; it was the first time gold, silver and bronze medals were awarded and Kiralfy’s own son was a 100m sprinter on the U.S. Olympic Team. The modern marathon distance was established in 1908 when the starting line was moved to Windsor Castle to allow the Royal Family a good view: the distance between the castle and the White City stadium of 26 miles 385 yards has been since become the standard. Quite memorable Olympics then; quite a memorable exhibition too!

"We are having our friends to see us in order that we may have a good time together, and may strengthen our mutual good will by comradeship." (The Times, 2nd April 1908)

Watch newsnight on the exhibition here

© CH 2008. This page is an extract from research in progress. You are welcome to quote any of the above and it will be appreciated if you would kindly acknowledge this research and include a link to this page.